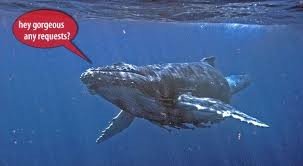 There has been little study on vocalisations other than song, generally referred to as ‘social sounds’. One study using hydra phones found that social sounds were heard only in groups containing more than three whales and were associated with competitiveness of the males. Studies now suggest that singers are always male and a combination of sexual advertisement, a means of dominance sorting in males. A spacing mechanism in males and a mechanism of ‘organising’ males during the breeding season. Singers typically stop when they are joined by other whales. The song may be repeated continuously for hours by the males. Singing is heard on the winter breeding grounds and on migration. The song can last from a few minutes to around 30 minutes and heard from the waters in front of your Rincon surf rental. Songs are different in each group and it changes slightly each year. When the whales are relatively close, anyone underwater can feel the sound waves their vocalizations generate in our rib cages, in addition to hearing them. At times songs are so loud and persistent that they are completely distracting. At their loudest, the sounds are close to overpowering. At times lie these it may seem impossible to do or think of anything else but cherish the moment. Remain quiet and still and if your lucky, they just might continue. Stay with us one time and you soon understand why our Rincon beachfront wedding venue has became so popular.