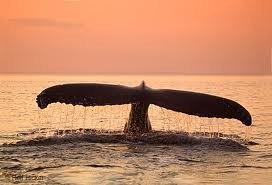 Humpbacks can reach lengths of 50 feet and weights up to 50 tons and have a life span of 50 years if lucky. The head of the humpback whale is large in proportion to the body and is up to a third of the total body length. These magnificent creatures have gentle dispositions and may have contributed to their being poached almost to the point of extinction. There are estimates of 15,000 humpback whales in the world. Today, the humpback whale remains on the Endangered Species List but often seen from your Rincon Sandy Beach vacation rental. We have been told that this assisted in the designation of Tres Palmas Beach National Marine Reserve. This is now of particular importance because this area is home to some of the healthiest Elk horn Coral in the world. A large area along your Rincon surf rental has also recently been established a threatened species under the Endangered Species Act for this beautiful coral. The Humpback’s appear to be increasing in numbers, although populations were quite low until the mid 1970. They were given protection in 1963 by the IWC but still threatened; actually the International Union for Conservation of Nature and Natural Resources (IUCN) describes the status of the humpback whale now as vulnerable. Think about and watch for these magnificent creatures as you enjoy the day in one of our Rincon Sandy Beach apartment verandas.