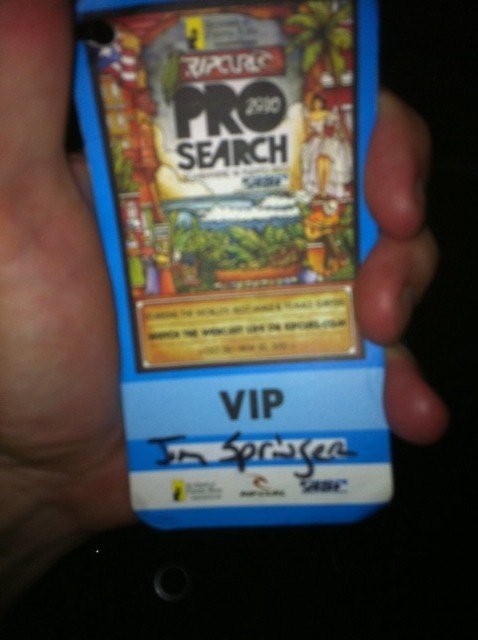 Big Wednesday party was the only Rincon sanctioned event for the Puerto Rician Rip Curl World Surfing Event. The party was held in the beachfront luxury courtyard of Pelcan Point. The party also turns into a memorial cermemony for 3 time world Champion Andy Irons as he was pronounced dead the previous day. Stephanie Gilmore has already been crowned the 2010 Worlds woman Champion, and Kelly Slater took his 10th World Title win a few days later in his native country. He beet the local PR Puerto Rician pro Dillian Graves which was a huge local inspiration and great surfer. Kelly Slater takes a 10 million dollar extra purse (stock in Quick Silver) for taking a 10th world title, unheard of ever before Slater entered the arena. The Surf Event was over shadowed by the tragic and suden death of Andy while he was here for this huge event. Andy leaves his 8 month pregnant wife behind. The party at Pelican Point was restructured to be a memorail party in his honor and turned out to be a huge party overlooking the surf on Sandy Beach. Tents were provided by Oakley and The Room and food and drinks provided by Rip Curl and Pelican Point and brought people from all over Puerto Rico to include the San Juan Tourism staff. More events are planned for the surf out front in front, where Pelican Point will be the predoninate sponsor.